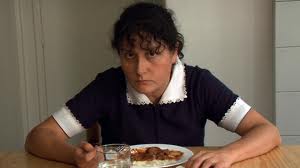 I worked for a woman,
She wasn’t mean –
But she had a twelve-room
House to clean.

Had to get breakfast,
Dinner, and supper, too –
Then take care of her children
When I got through.

Wash, iron, and scrub,
Walk the dog around –
It was too much,
Nearly broke me down.

I said, Madam,
Can it be
You trying to make a
Pack-horse out of me?

She opened her mouth.
She cried, Oh, no!
You know, Alberta,
I love you so!

I said, Madam,
That may be true –
But I’ll be dogged
If I love you.

In these few lines [“Madam and Her Madam”] poet Langston Hughes got to the very heart of the issues that inform tonight’s film: the tension between the needs, expectations and feelings of servants and their employers.

The director, Sebastian Silva, felt this tension acutely in his upper-middle class home in Santiago, Chile. “It was strange growing up with a maid,” he says. “They live with you, but they don’t share certain things like dinner and holidays.” … [The maid] “was there, but she wasn’t there at the same time. … You love them, but … There are social boundaries, and there are conditions, so the love you feel towards these people is not as pure or spontaneous as it is towards your family.”

The “emotional dyslexia” Silva felt is expressed in the film when the maid, Raquel, invited to join the family after dinner to celebrate her birthday with a cake she herself has made, stops after a few mouthfuls, clears the table and begins to wash the dishes.

Catalina Saavedra, the actress who plays Raquel, describing her favorite scene, confirms the servant’s alienation: “she goes into the bathroom and puts on [a] gorilla mask (belonging to one of the children). She looks at herself with the gorilla mask: What the f- am I? I’m a monkey who’s employed in this house? A slave? She has no idea where to stand, socially. She’s totally lost.”

At once valued and overworked, accepted by but isolated from the family she serves, with no family of her own and lacking an existence beyond her workplace, Raquel becomes, like the actual Silva family maid on whom she is modeled, “claustrophobic; … her lack of social life and sexual life started affecting her psyche,” Silva says. “It made her very bitter and territorial, and got her far from the possibility of real love.”

She becomes like the manic housekeeper characterized by Simone de Beauvoir: “severe, preoccupied, always on the watch. She loses her joie de vivre, she becomes over prudent and avaricious … She becomes bitter and disagreeable and hostile to all that lives; the end is sometimes murder.”

Raquel expresses her frustration not only through increasing sullenness with the family but in antagonism, at once fierce and comic, to a series of second maids hired to alleviate her workload but whom she regards as threats and treats as interlopers.  For a while it is not clear how badly this may turn out, but in the end Raquel is redeemed by Lucy, the only one of these maids who accepts her and treats her with compassion.

La Nana was filmed in Silva’s actual childhood home with Catalina Saavedra, an experienced television actress who had portrayed maids in several sitcoms, playing Raquel. This performance, her  first leading film role, has earned several awards, including a World Cinema Special Jury Prize for Acting at the 2009 Sundance Film Festival. Having considered turning down the role to avoid being typecast, Saavedra now hopes “that people who watch the film reflect on how to improve their employees’ situation.”

La Nana was first screened privately for the real-life maids who worked for the director’s family, one of whom reacted to the film’s social commentary with tears, while the other responded to its humor with laughter. Silva premiered the film in Santiago for an audience of 300 maids: “It was very vocal,” Silva reported. The Q&A was awesome. Many noted that the only time their job is noticed is when it’s not done – it’s just taken for granted.”

Their experience is not unique, however. That it is shared by domestic workers everywhere may explain the film’s international appeal and success. It is even shared by live-in maids in the U.S., such as Mexican-American Angelica Hernandez who, starting as a newly-wed, could only see her husband “briefly on Sundays: ‘I used to go to my room and cry,’ she says. Her work was never done: She’d go to bed at midnight and get up at 6 a.m. to make breakfast and then get the children ready for school. … ‘It’s hard for us because there are no rules and no support’.” Some employers even refused to pay her.  “There are good employers,” Hernandez says, “but it’s like winning the lottery.”

Employers’ contradictory attitudes and behavior to domestic workers justify what Dennis Harvey has called ‘a primal bourgeoise fear’: “Expecting both subservience and gratitude from their underlings, a variably liberal-guilt-plagued ruling class has always secretly dreaded that moment
when ‘the help’ might rise up and prefer cutting a dainty throat to taking one more order.” We find this bourgeoise fear perfectly mirrored in Jenny’s “dream of the kitchen maid,” from Three Penny Opera –  as rendered by Nina Simone in 1964:

Then one night there’s a scream in the night
And you wonder: “Who could that have been?”
And you see me kinda grinnin’ while I’m scrubbin’
And you say: “What’s she got to grin?”
I’ll tell ya: there’s a ship, the black freighter,
With a skull on its masthead, will be comin’  in.

This introduction was presented on 26 March 2010.