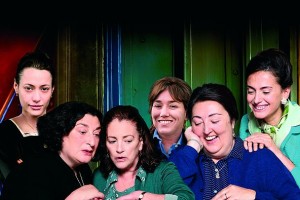 The Women on the 6th Floor presents the life of a group of Spanish women in Paris during the 1960s working as maids for upper middle class French families. These Conchitas, as they’re still known in Paris, were part of the migratory flow from Spain to several European countries, following the conclusion of the second war world.

Between 1946 and 1958 some 624,000 Spaniards — often entire families — abandoned their homeland, fleeing from Franco’s harsh repression, persecution and Spain’s extremely impoverished post-civil war conditions. This first migratory wave went mainly to Mexico, Argentina, and Chile — countries that received them with open arms. These families established themselves permanently in their adoptive countries, and the few that eventually returned to their homeland did so in the very last years of their lives, especially following the death of the dictator Franco in 1975.

In the early 60s, faced with deteriorating economic conditions, including massive unemployment, and bowing to international pressure, Franco replaced a pure fascist military government with a new technocratic government that nevertheless was equally repressive of labor and union rights.  The new technocrats signed collaboration agreements with France, Germany and Switzerland which opened the door for approximately two million Spaniards to work temporarily in those countries.

This second wave of emigration allowed the Spanish government to reduce expenditures in education, health and other social services while obtaining currency through the money remittances sent home by the emigrant workers. In essence, the regime exported Spain’s “redundant labor” thereby easing what had been chronic under- and unemployment, and somewhat reducing social tensions.  Spain began to experience an economic advance that in good measure was paid for by Spanish emigrant workers.  It should be noted that the collaboration agreements which established the migratory quotas left the workers largely unprotected with respect to social or labor rights.

It is in this historical context that tonight’s movie is set.  By the mid-1960s some 50,000 Spanish women were working as maids in France, the great majority in Paris. Most of them had never left their towns and villages before, let alone crossing the border. With few skills and less education, upon arrival their only support came from friends or family members that had preceded them abroad. Their deplorable living conditions are well-portrayed in French director Phillippe Le Guay’s film.

The Women on the 6th Floor recreates a reality that was sadly common during those years. The director’s approach, however, is that of light-hearted “social comedy.”  He employs an excellent cast of Spanish actresses who in fact developed the same intense camaraderie during the filming as the characters they portrayed in the story. The movie, which proved a great box office and critical success in France, earned for Carmen Maura the French Film Academy’s César Award for Best Supporting Actress.

It turns out that Phillippe Le Guay was cared for at a young age by one of these “Conchitas” that had fled from Spain’s misery and lack of economic opportunities. He commented in an interview that his intention in this film was “to render homage to these Spanish women.” He does this by creating a contemporary “fairy tale”, an aesthetic approach quite in vogue in recent French cinema.   Infused with doses of humor that provoke smiles, his film invites the French viewers to reflect on their own past behaviors and attitudes. The formula works well as entertainment but I fear that it essentially trivializes the real circumstances endured by the female domestic workers and therefore, finally, lacks transcendent historical value.

As I mentioned before, the French critics and audiences were very positive;  however Spanish critics and audiences were less favorably inclined towards The Women on the 6th Floor. For many Spaniards the film abounds in stereotypes and clichés and rather superficially portrays behaviors of both the French and Spanish characters. For example, while the innocent romantic storyline that Le Guay develops might enhance the movie’s “charm,” it obscures the historical reality that the exploitation of female domestic labor was often accompanied by sexual exploitation as well.  Many Conchitas returned precipitously home to Spain with “a croissant in the oven.”

Certainly this light-hearted vision of Spanish maids along with their bourgeois French employers, together with the film’s mild social satire, charms and engages the audience. It also reminds us of an important but often overlooked chapter of Europe’s post-war labor history.  Unfortunately, the real-life stories of las Conchitas de Francia rarely ended as happily as those portrayed here.