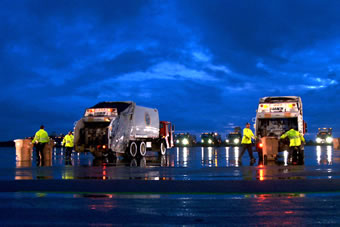 Tonight you are going to see an extraordinary film — extraordinary because it is not only about work and workers but because it shows workers doing work and because it celebrates both the workers and their labor. Unlike the work depicted in many of the labor films we’ve screened over the years — work in mines, fields, factories and other worksites — trash collection takes place on your own street. You have seen these workers and their vehicles moving in ways that might be imagined as dance.

A choreographer in Austin Texas, Alison Orr, was inspired to imagine a trash dance performed by these workers and vehicles. Tonight’s film tells the story of her efforts to recruit and persuade trash workers to share and expand her vision and to then collaborate to realize their vision. So, in addition to showing trash workers and their labor, the film reveals the choreographer’s work in developing and creating a dance.

A third kind of work, implicit rather than depicted, is that of Andrew Garrison, the filmmaker who records the project — accompanying Alison and the trash workers and documenting both the dance creation process and the resulting dance performance.

So as you watch the film please note the several kinds of work it documents and consider the questions it raises, including the role of the trash workers’ union — AFSCME local 1624, the nature of the collaborative documentation process, the technical challenges facing the filmmaker, and the assumption of a society which generates excessive trash.

And we might also consider the filmmaker’s intent to change our view of work and workers:

“For so many of us, this work is invisible,” says Garrison. “We only notice when a truck is in our way as we drive to work or if something has spilled on the street. Through the film you meet and really get to enjoy the people at work every day for us. I have had people in test screenings and web screenings say things like, they really appreciate their trash collectors now, and how it makes them feel proud, and how this film could be something important in places where public employees are under attack.”