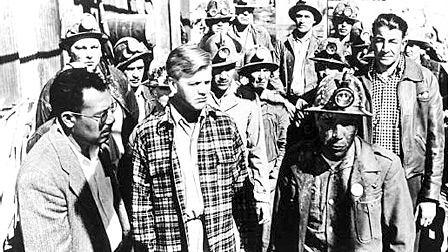 Speaking to their 1953 convention, Screenwriter Michael Wilson invited members of the International Union of Mine, Mill, and Smelter Workers to think back over the movies they had seen since World War II:

He and other blacklisted filmmakers were then completing Salt of the Earth, a movie they hoped would answer this question.  By focusing on a 1951 strike of New Mexican zinc miners in which the wives of miners took over the line when an injunction prevented the men from picketing, by exploring the resulting tensions within the miners’ families and their union, and by having the miners and their families play most of the roles and participate in script development, the filmmakers  hoped to open up what Wilson described as “a rich, untapped source of American culture … the reality of working peoples’ lives.”

Wilson, producer Paul Jarrico and director Herbert Biberman were, ironically, freed to undertake this film by blacklisting policies adopted in 1947 by the Association of Motion Picture Producers which included discharging “alleged subversive and disloyal elements in Hollywood,” working with the Hollywood Talent Guilds “to eliminate subversives and to safeguard free speech and a free screen,” and requesting Congress “to enact legislation to assist the American industry to rid itself of subversive, disloyal elements.” One of the original Hollywood Ten, Biberman had spent six months in jail for refusing to share his political views with the House Un-American Activities Committee (HUAC).

Because the filmmakers were blacklisted and because the film was sponsored by the Mine, Mill and Smelter Workers Union, which had been expelled from the CIO in 1951 as communist-dominated, Salt of the Earth was opposed and harried at every stage. Indeed, it is something of a miracle that the film was completed, that it has survived, and that we can see it today.

During production, opposition came even from labor unions within the film industry itself.  For example, IATSE (the International Alliance of Theatrical, Stage Employees and Moving Picture Machine Operators ), threatened to withdraw the  cards of members who served on the Salt of the Earth crew, including cameramen, propmen, etc. During filming, aircraft buzzed the location to disrupt sound recording, vigilantes fired on the crew, a cameraman was beaten, and two union halls were burned. Immigration authorities arrested, detained and then deported the leading lady, Mexican actress Rosaura Revueltas (whom the Mexican film industry subsequently blacklisted); an abbreviated filming schedule had to be suppplemented with work done secretly in Mexico, including isolated shots of Revueltas.

In February, 1953, while the film was still being shot, California Representative Donald Jackson attacked the film on the floor of Congress, alleging that “If this film is shown in Latin-America, Asia and India, it will do incalculable harm, not only to the United States but to the cause of freedom everywhere” and he threatened to “do everything in [his] power to prevent the showing of this Communist-made film in the theatres of America.”  Jackson telegrammed Howard Hughes, demanding whether there was “any action that industry and labor in motion picture field can take to  stop completion and release and to prevent showing of film here and abroad?”

The RKO executive responded that “Before a motion picture can be completed or shown in theatres, an extensive application of certain technical skills and use of a great deal of specialized equipment is absolutely necessary — film laboratories, suppliers of film, musicians and recording technicians… technicians who make dissolves, fades, etc., owners and operators of sound recording equipment and dubbing rooms, positive and negative cutters, [and] laboratories that release prints.”  In stating that the film industry could deny access to these resources, Hughes revealed the film industry’s strategy for impeding post-production on Salt of the Earth. Thus film could be processed only with difficulty and through elaborate subterfuge. Experienced cutters would not work on the film and one cutter who did turned out to be reporting to the FBI. The sound track had to be recorded as if it were for a film called Vaya Con Dios. IATSE even disrupted the development of film positives.

Upon the film’s release, interference became overt censorship as IATSE played a major role in preventing commercial theatres in the US from showing the film.  In January, 1954, the union notified its membership that “before handling or projecting the film entitled SALT OF THE EARTH, you are hereby instructed to contact the general office.” A suit brought by  Biberman and his associates against the film industry contending that the major producing and distributing companies, laboratories, IATSE, theatre owners, Congressman Jackson and others had conspired to violate US anti-trust laws in suppressing Salt of the Earth was dismissed in 1964 by a jury which  accepted the defendants’ argument that there was no conspiracy since they had acted individually.

Meanwhile, in the court of public opinion, Salt of the Earth was receiving acclaim both at home and abroad.  It won grand prize at the 1954 International Film Festival in Czechoslavakia (where it was shown by the Czech Miners Union in a 35,000 seat outdoor auditorium, leading the union president to urge Czech filmmakers to “create films of this stature.”   In 1956 the Academie du Cinema de Paris awarded it the International Grand Prize for best film to be shown in France the previous year. In 1975 the Danish Association of Film Critics named it one of the year’s ten best and, that same year, the film was requested by Portugal within a week of the collapse of the fascist dictatorship. The film was widely praised by American critics, apart from Pauline Kael who dismissed Salt of the Earth as “a piece of Communist propaganda.”

In suppressing Salt of the Earth the U.S. motion picture industry had drawn to it more attention than it would otherwise have received and the film soon became an underground classic, showing on a circuit of college, union and church screens. While denying the film the short-term profits of wide circulation, the censors virtually guaranteed it notoriety. And despite all the efforts to thwart its production — efforts that had serious effects on its actual content, composition and physical quality — Salt of the Earth has stood up as a successful work of film art for nearly 50 years. Now recognized by the Library of Congress as part of America’s film heritage, it has more than fulfilled the hope voiced by Herbert Biberman and Paul Jarrico in 1953 that “trade unionists someday discover that this picture is the first feature film ever made in this country of labor, by labor, and for labor;” that “minority peoples come to see in it a film that does not tolerate minorities but celebrates their greatness;” that “men and women together find in it some new recognition of the worth and dignity of a working-class woman.”

This introduction was presented on 1 November 2000.