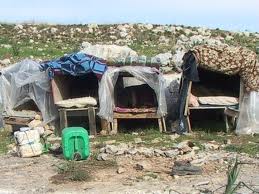 Nine  Star Hotel (Malon 9 Kochavim) isn’t a fancy hotel that you would like to stay at for your vacation. Its name comes from a sarcastic remark made by one of a group of undocumented Palestinian construction workers, referring to their makeshift shanties in the hills above the Israeli city of Modi’in.

Directed by Israeli filmmaker and cinematographer Ido Haar, and financed by Israeli channel 2 TV station, Nine Star Hotel is a documentary that accompanies Palestinian workers from the Israeli-occupied West Bank as they try to dodge the Israeli authorities in order to get to work. Since the film was produced for an Israeli audience intimately familiar with the issues of undocumented Palestinian workers — although they often look the other way — not much background information is provided in the film.

The opening scene may remind you of undocumented Latinos crossing the Mexican-US border playing hide and seek with the Migra, like a scene from The Three Burials of Melquiades Estrada, shown earlier in this year’s Labor Film Series. However, the relationship in the Israeli-Palestinian conflict between two groups asserting their national identities and a protracted military occupation — combined with the class differences — makes for a unique situation. These workers aren’t coming from faraway lands, but from villages that are usually no more than an hour or two away.

Unlike many of the Latin Americans that cross border into the US planning to immigrate or stay for an extended period, the Palestinians are generally looking to spend some time working in Israel with frequent visits back to their villages. In the current political situation it is highly unlikely that many of the Palestinian workers would have an option to resettle in Israel, even though some of them may be descendents of Palestinians who were displaced from Israel in the 1948 or 1967 wars.

The film shows a range of treatment of the Palestinian workers by the Israeli security forces; sometimes aggressive yet sometimes friendly and helpful. It realistically depicts the multifaceted relationship between the two peoples, including the imbalance of power between them.

Modi’in is a new city that was built starting in the 1990s between Tel Aviv and Jerusalem, close to the border between Israel and the West Bank known as the Green Line. Modi’in and Rochester have some more recent connections: the Rochester Jewish Community Federation has had a partnership with Modi’in for a number of years that includes cultural exchanges. The city of Modi’in was designed by the architect Moshe Safdie, who is designing downtown Rochester’s Renaissance Center.

Modi’in is located at the site where in ancient times the Maccabees led a guerrilla war in the Judean Hills which united Jewish peasants with the Jewish working class of Jerusalem against the Greek occupation and the collaborators in the local aristocracy. This narrative is the story upon which the holiday of Chanukah is based. Some see it as a symbol of Jewish nationalism while others see it as a symbol of Jewish class struggle that the workers won, although the Hasmonean Kingdom established as a result of the Maccabean revolt ultimately became corrupt.

Director Ido Haar does a good job capturing the experience of the Palestinian workers, and getting them to express themselves openly. The film is mostly in Arabic with some Hebrew. For those in the audience who know Hebrew, watch for the ironic moment where one of the Palestinians is wearing a t-shirt with the symbol of an Israeli army unit.

Due to the travel restrictions Israel has imposed on Palestinians from the occupied territories over the last decade, Israel now imports many foreign workers from other parts of the world, particularly Africa and Asia, to work in menial jobs — which has caused the inevitable problems that come when a nation chooses to exploit manual laborers from near or far away, without giving them the same rights as citizens. Nine Star Hotel does not deal with these issues, although hopefully future Labor Film Series can include films on this topic, such as James’ Journey to Jerusalem and Paper Dolls.

For more information on the protection of disadvantaged workers’ rights in Israel, including Palestinians, migrant workers, subcontracted workers and immigrants, you can visit the website of Kav LaOved (The Worker’s Hotline) at www.kavlaoved.org.il . Kav LaOved is a non profit non-governmental organization committed to the principles of democracy, equality and international law concerning human and social rights.

This introduction was presented by Michael Argaman at a screening of Nine Star Hotel on 19 October 2007.