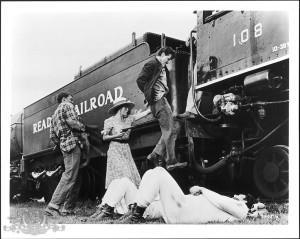 In Sister of the Road, published in 1937, Box-Car Bertha Thompson recounted her life: early years in her mother’s South Dakota boarding house; childhood stays in anarchist communes near Little Rock and Tacoma; hoboing alone, with one of her sisters or one of her lovers; working for a Chicago abortionist; running with a gang of midwest shoplifters; bedding 1500 men — one of whom fathered her daughter — during a two month prostitution stint; hitchhiking around the country collecting data on transient women; working for a pathology clinic in Chicago, running a women’s service bureau in Alabama and becoming secretary of New York City’s Unemployed Women’s Education Association.

But this story was not a true biography, much less her autobiography “As Told to Dr. Ben Reitman.”  Dr. Reitman, author of Sister of the Road, was himself a hobo, a physician to hobos and whores, an advocate for hobo colleges; an abortionist and, as Emma Goldman’s lover, a dedicated birth control advocate seared by vigilantes with the letters “I.W.W.”  Although Reitman said his Box-Car Bertha character was an amalgam of several women he knew, because he shared many of the experiences he attributes to her, some consider Sister of the Road  to be Reitman’s autobiography.

Apart from its whorehouse episode and any coincidental physical resemblance between Barbara Hershey and Bertha, described by her first lover as “built like a truck horse,” this film bears little connection to the book from which it purports to have been adapted. As Scorcese noted, “the screenplay has very few similarities with the book. International bought the rights though we only used a a few characters.”

So how did this film, based on a much-distorted adaptation of a fictional autobiography, come to be? We must thank Arthur Penn, whose groundbreaking Bonnie & Clyde, with its embrace of anarchic violent female-led banditry, created a sensation when it was released in 1967, a time of increasing militancy against the escalating war in Vietnam and race riots in US cities. While audiences strongly identified with the film’s anti-authoritarian violence reviewers were scandalized, except for Pauline Kael, whose 9,000-word defense not only kindled the film’s popularity but established her as a film critic. Calling Bonnie and Clyde “the most excitingly American American movie” in years and noting that “The audience is alive to it,” Kael acknowledged that it “divides audiences.When an American movie reaches people, when it makes them react, some … think there must be something the matter with it.”

The success of Bonnie & Clyde inspired Roger Corman, “King of the B movies,” to make an even more violent film, Bloody Mama, about Ma Barker’s notorious gang. Comparing Bloody Mama to Bonnie & Clyde, Corman said he decided “not to romanticize or glorify, but to stay closer to what I felt the reality was. I had pictures of the Barkers and I knew what they looked like — they were not handsome or pretty.” Corman portrayed an abused and neglected Kate Barker, played by machine-gun toting Shelley Winters, leading her brood of sociopath sons on a rampage of carnage and theft.

Not content with this effort, Corman envisioned Boxcar Bertha as a sequel to Bloody Mama. In the process of script development, Reitman’s memoir was transfigured. The wanderings of an itinerant female anarchist  become a trail of holdups and train robberies by an oddly-assorted gang led, if that is the word, by an orphaned Bertha (Barbara Hershey). With her are Big Bill Shelly (David Carradine), a railroad worker and organizer for the Brotherhood of Workers (a nod to the IWW and its leader Big Bill Haywood);  a timid Yankee card shark (Barry Primus); and a black mechanic (Bernie Casey).

Their nemesis is the head of the Reader Railroad (David Carradine’s father John), who wants to prevent his workers from unionizing. As Big Bill tells him during a holdup, “I don’t want to steal your watch. I want to smash your railroad.” In his mind, stealing from the railroad is justifiable:  “I ain’t no criminal” he says: “I’m a union man.” During one robbery he makes the railroad payroll clerk add ten dollars to each worker’s pay packet, and after another heist he delivers his share to the union office. His apotheosis as a labor martyr brings the film to a shocking conclusion.

It is worth noting that apart from the Writers Guild and the Screen Actors Guild, producer Corman avoided working with Hollywood unions — which helps explain his record low budgets and the title of his book, How I made a Hundred Movies in Hollywood and Never Lost a Dime.  According to David Carradine, Corman’s press releases for Boxcar Bertha “pointedly emphasiz[ed] the film’s lovers-on-the-lam plot to deflect attention from its pro-union political message.”

eaking of the film’s lovers, Barbara Hershey and David Carradine actually were lovers, of whom Playboy Magazine published explicit photos made during the film’s production. Also, for reasons having nothing to do with the story or its source, the film identifies the four gang members with the four principal characters of the Wizard of Oz:  you may want to look for the frequent allusions. And you can catch Martin Scorcese in a cameo role as the john in the bordello who wants to spend the entire night with Bertha. Finally, promoting itself as North America’s last “exclusively steam-powered common carrier standard gage railroad,” the Reader — also known as the ‘Possum Trot Line — still makes tourist runs in Arkansas.

When Scorcese screened Boxcar Bertha for John Cassavetes his friend told him, “Marty, you’ve just spent a whole year of your life making a piece of shit. It’s a good picture, but you’re better than the people who make this kind of movie. Don’t get hooked into the exploitation market, just try to do something different.”

You must decide whether you agree with Cassavetes, but a few years later Scorcese would make a very different film, based on a Kazantzakis novel recommended to him by Hershey and Carradine, The Last Temptation of Christ. It would feature Barbara Hershey as Mary Magdalene.