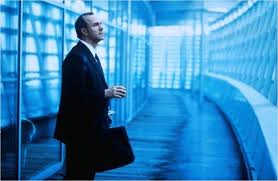 Time Out (L’Emploi Du Temps) is an important labor film because it is truly about work — about how work and the absence of work define people in the post-industrial world.

Unlike Human Resources, Laurent Cantet’s first feature film, which dealt with the conflicting values of a production worker and his manager son in a unionized manufacturing plant, Time Out looks at intergenerational values within the bourgeoisie — a world, Cantet notes, of bureaucrats and administrators: “Vincent,” the protagonist, “didn’t struggle for his place in society. It was given to him because of his milieu. And so he had the continual feeling of being a usurper.”

The story of Time Out is fairly straightforward: Vincent is fired from his job as a consultant and rather than tell his family he pretends to have been promoted to a better job in Switzerland. He spends his time driving around, visiting office buildings where he pretends or imagines he might work. Much of the film is seen from his car: “When I first started working,” he recalls, “driving was my favorite part. The only thing I liked about the job was driving.” Vincent supports his invented life with money given him by friends, colleagues and family to invest; when he can’t repay them, he joins a smuggling operation before returning to the management world.

What is not straightforward is Vincent’s ambivalent values, his uncertain motivation, his ambiguous behavior. Not since Chaplin’s film, Monsieur Verdoux, have we seen such a chilling “meditation on double identity,” as Cantet refers to his film. To some extent Time Out’s double identity theme is based on the story of an actual person, Jean-Claude Romand, who passed himself off for 18 years as a medical researcher for the World Health Organization in Geneva and then murdered his family when the imposture was discovered.

What this story means to you, how you interpret it, will probably depend on your attitude toward the work ethic. “A religion of work surrounds us,” says Cantet. “We’re all devoured by this idea that being out of work is somehow shameful. Vincent lies not only because he’s ashamed of being idle, but also because he wants to stay that way.” If you accept (“believe in,” to use religious terminology) the work ethic; if you hold that having work, earning a living, eating your bread by the sweat of your brow is a moral imperative, an injunction dating perhaps to the expulsion from Eden, then you may see Time Out as a parable about the loss of self-worth that can accompany the loss of work. You may empathize with Vincent, projecting the sense of shame you believe he should appropriately feel, the sense of shame you believe you might feel in such circumstances.

To the extent that you question or reject the work ethic you are likely to see Time Out as a critique of post-industrial work: labor that produces not such necessities as food, clothing or shelter, nor even material commodities, but rather consists largely in the production and exchange of ideas, information, plans, schemes, projects. “I tried to show [Vincent] as a ghost,” Cantet says, “moving through an unreal world of distant sounds and glass partitions … an abstract architecture that is the physical embodiment of the immaterial labor taking place within it.” Vincent’s inability or refusal to commit to such “immaterial labor” can thus be construed as resistence, reminscent of Biff Loman’s outcry in Arthur Miller’s Death of A Salesman — a play about the loss of work:

I stopped in the middle of that building and I saw — the sky. I saw the things I love in this world. The work and the food and the time to sit and smoke. And I… said to myself… why am I trying to  become what I don’t want to be? What am I doing in an office, making a contemptuous, begging  fool of myself, when all I want is out there, waiting for me the minute I say I know who I am.

Why can’t I say that, Willy?

The depth of Vincent’s characterization and the strength of Time Out lie in the film’s ambiguity: it can be read from either perspective on the work ethic and a viewer may experience it from both points of view at the same moment.

Cantet’s own view is that work based on the sale of labor in units of time must be replaced with plans to redistribute social wealth. “Why should income necessarily be linked to labor?” he asks. “Society generates a lot of money. Just by recycling the money spent on social services, everyone could be paid for living. My film is also a plea for that idea.”  Such views have a long tradition in France, in the work of economic philosopher Andre Gorz and others, and finding classic expression in Paul LaFargue’s refutation of the work ethic, The Right to Be Lazy, in which he notes that “Jehovah the bearded and angry god, gave his followers the supreme example of ideal laziness: after six days of work, he rests for all eternity.”

This introduction was presented by Jon Garlock at a screening of Time Out on 22 October 2005.