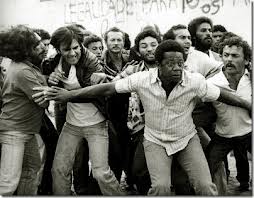 Mark Twain once remarked that he was assured by a music critic friend that Wagner’s music is better than it sounds. In setting a context for this screening I’d like to suggest that Leon Hirszman and Gianfrancesco Guarini’s 1981 Brazilian film, They Don’t Wear Black Tie (Eles Não Usam Black-Tie), is even much better than it looks and, at least to my eyes, it looks very good indeed.

In fact, viewed in the context of its particular historical moment, and especially in the context of Brazilian labor and cinema history, this film represents something of a landmark. Like its contemporary Polish counterpart, Wajda’s Man of Iron, They Don’t Wear Black Tie is much more than solid cinematic art. Like Man of Iron, it is even more than a chronicle of and tribute to the heroic contemporary labor and political struggle against dictatorship and police state repression. Whereas Man of Iron chronicled the beginning of Poland’s Solidarity movement in the late 70s, Black Tie narrates and celebrates the fledgling struggle of Brazilian workers in 1980 against the Brazilian military dictatorship that had seized power, with US support, in 1964.

Beyond art, narrative and tribute — and again, like its Polish counterpart — Black Tie was consciously conceived to be an instrument, indeed a weapon, in the very struggle which it portrayed. This cinematic art-as-weapon of social transformation approach to filmmaking first evolved in Brazil in the late 50s and early 60s as a movement then dubbed the cinema novo — the New Brazilian Cinema. In fact the director of Black Tie, Leon Hirszman, was one of the original pioneers of the New Cinema movement in Brazil. While undoubtedly influenced by certain European trends in filmmaking, particularly Italian neorealism and (especially for Hirszman) the Russian Eisensteinian tradition, Brazilian cinema novo was first and foremost a Brazilian phenomenon, stemming more from political than from aesthetic criteria.

As Brazilian nationalists, Hirzman and the other founders of cinema novo wished to rescue the Brazilian movie-going public from the cultural imperialist domination of foreign —read US — cinema. They set out to create a Brazilian cinematic language based on the exploration of authentic Brazilian themes and thus to rescue Brazil’s domestic film industry from the fluffy so-called chanchada musicals with their Hollywood-inspired production values. These chanchadas, these “singing-on-the-beaches-of-Rio” musicals were already in a state of decline during the 50s, and along with them the domestic Brazilian film industry. Television was increasingly keeping the public at home looking at ‘garbage on the small screen’ rather than going off to the movie theater to watch ‘garbage on the big screen.’

Most importantly, the founders of the 1950’s cinema novo wished to create a popular, purified Brazilian cinema that would commit itself to the struggle for Brazil’s social, political and economic transformation then being waged by a succession of increasingly left-leaning populist governments. Like those governments (particularly that of the ill-fated João “Jango’ Goulart who was overthrown by the 1964 military rebellion) cinema novo in the years immediately prior to the ’64 coup focused on the themes of Brazil’s rural impoverishment and exploitation. A number of films, for example, dealt with the plight of peasants in Brazil’s northeast or in the backlands’ sertão, dramatizing their struggles against the fazendeiro land barons. Similarly, the early cinema novo focused on the miserable alienated lives of the lumpen urban poor such as the dwellers of Rio’s favelas shanty towns.

In the wake of the ’64 military coup and the increasingly draconian repression of all forms of popular organization and dissent, including the virtual elimination of Brazil’s traditional organized labor movement, the cinema novo was forced into a dramatic change of direction. Without abandoning their commitments to the struggle for social justice and transformation, cinema novo directors increasingly forsook the brash, revolutionary contemporary realism of the earlier pre-coup period and instead embraced either distant historical themes or introspective explorations of the Brazilian middle class’s alienation and political impotence. In essence, in the immediate wake of the 1964 ‘setback’ the cinema novo posed the questions of: ‘Why did we fail?’ ‘Why was there the military coup?’  ‘Why did the intellectuals and artists not play a more successful role in the attempt to transform Brazil?’

With the implementation of the particularly oppressive Institutional Act Number 5 in 1968, cinema novo‘s cadre of directors increasingly cast their works in allegorical conceits, which they hoped would escape the regime’s harsh censorship and perhaps, more to the point, would keep them out of jail, keep them from being tortured or even worse. Even with the military’s partial loosening of restrictions on cultural life after 1975 — the beginning of the so called apertura (the ‘opening’) in Brazil — cinema novo directors tended to test the new climate by exploring relatively safe themes such as Brazilian machismo and eroticism, in such films as Bruno Barreto’s 1978 Doña Flor and Her Two Husbands. In fact there were many critics who considered the cinema novo, this Brazilian cinema pedagogy of the oppressed, to have become essentially a dead letter. With these films about middle class ‘conjugal warfare’ (e.g., cinema novo director Joaquim Pedro de Andrade’s 1975 film Guerra Conjugal), socially committed filmmakers were actually testing the military’s commitment to the announced “opening.”

Meanwhile the industrial working class, especially in São Paolo  — the center of the new industries in Brazil — was seizing the moment to protest fifteen years of labor’s repression and a Brazilian economic miracle built on the free market austerity super exploitation of the working class. Largely spontaneous in origin and, for both better and worse, without the hand of experienced labor leadership to guide it, the strike movement of 1979-1980 would within half a decade accelerate to gigantic proportions and emerge as the leading popular challenge to continued military rule. And in fact a good argument can be made that working class opposition to the regime was the prime mover in finally forcing the regime to relinquish power. This new working class movement also raised up the most important opposition leader, the metal workers union leader da Silva, ‘Lulu’ as he is affectionately called by the Brazilian workers.

It was in this context of the decline of cinema novo and this upsurge of popular challenge to the military regime that Leon Hirszman, one of the old stalwarts of cinema novo, boldly and courageously chose to resurrect the notion that film could and should be a weapon in social transformation and dared to portray the actuality of the moment. With its appearance in 1981 They Don’t Wear Black Tie was greeted as the emergence of, as they put it in Brazil, cinema novo de novo — the New Cinema anew, restored, resurrected. To tell the story of contemporary working class life and the emergent labor militancy of  wildcat and general strikes, Hirszman chose to adapt and update a 1954 play by the renowned playwright-actor Gianfrancesco Guarnieri, who plays one of the lead roles, the father, Octavio — the old labor leader.Together Hirszman and Guarnieri set the action in São Paolo, updated it and focused on the new labor militancy.

If at first glance much of this movie seems like soap opera, let me suggest that the soap operatic elements in this film are quite consciously used by Hirszman to draw an audience out of their homes watching the cruddy soap operas on TV and draw them into the movies where they are shown various slices of domestic life placed in the context of labor struggle and labor militancy.

The themes of the movie touch on several very important questions, among them generational conflicts within the labor movement itself — youth trying to find its way, trying to find its own language in labor struggle: to what degree ought we follow the path of old men like Octavio, the father who spent years in jail earlier on for his labor activities? It’s also an exploration of generational conflict wrought by fifteen years of dictatorship: to what degree have the youth in Brazil simply been bought out? Has their value system been bought out by the free market values of military dictatorship? Issues of solidarity: to what degree can a labor movement deprived of its leadership in fierce repression of a military dictatorship build a viable solidarity among workers?  Also the film courageously treats the machista theme — the theme of male dominance in Brazil and Latin American society — in a fairly creative fashion.

The point I’d like to stress is that not only is this fine cinema-making but, given the particular moment and the courage that it took to make this film, They Don’t Wear Black Tie really is a landmark in the new Brazilian cinema.

This introduction was presented by David Tamarin at a screening of They Don’t Wear Black Tie on 20 March 1991.