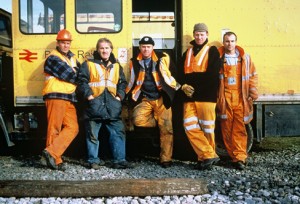 The Navigators is the sixth film by Ken Loach to be included in these Labor Film Series. There’s a good reason why we’ve shown so many of his films:  of contemporary filmmakers Ken Loach has dealt most consistently and critically with the experience of the working class.

His early work for the BBC in the 1960’s included dramas on social issues such as homelessness (Cathy Come Home) and increasingly political films dealing with British dockworkers (The Big Flame), glass workers (Rank and File), and the 1926 General Strike (Days of Hope). With the election of Margaret Thatcher in 1979 and the Conservative government’s program of privatization
— an assault on the working class that drove unemployment from half a million to over three million within a year — Loach turned to documentaries. He thought these could be produced cheaply and quickly and, broadcast on television, would reach the widest audience. However, his major effort, a four-part series on Questions of Leadership dealing with the ways in which the leadership of British trade unions undermined the militancy of rank and file steel workers and coal miners and played into the hands of business and government, was suppressed by Channel 4 and never shown. His documentary South Bank, on the cultural resistance of the coal miners during their bitter 1984-85 strike — a film on their  songs and their poetry — was similarly suppressed.

In the 90s Loach turned to making feature films depicting a defeated working class struggling merely to cope and survive — as one critic describes them, “films about ducking and dodging as class struggle:”  Riff-Raff (1991), Raining Stones (1993), Ladybird, Ladybird (1994),  Land and Freedom (1995), Carla’s Song (1996), and My Name is Joe (1998). In 2000 he directed  Bread and Roses, an upbeat account of the successful Justice for Janitors organizing campaign in Los Angeles.

Loach chronicles this episode in the history of modern capitalism through the story of a gang of track maintenance workers, whose cameraderie and cohension as a work team, whose pride in their work skills, whose personal lives and very values are compromised and destroyed just as the rails they maintain are compromised and the trains which run on them are destroyed. Loach’s success in telling this story derives from the authenticity of both the script and the performances.

Ron Dawber was not a scriptwriter but a railroad worker. He had worked 18 years for British Rail at Sheffield’s Signalling and Telecommunication department and had experienced privatization firsthand as a union representative.  He wrote Loach about these experiences and, when Loach asked to see a script, he drafted one in six weeks. Though the script underwent considerable revision, “Rob had a good ear for dialogue,” Loach noted; “his strengths were in capturing people at work.”

Those strengths are augmented by the way dialogue is presented, not by professional actors but by comics and singers from the north England circuit, a cast carefully recruited by Loach for their timing and ability to ad lib. These performers were comfortable with Loach’s directing style which favors capturing what goes on in front of the camera (without controlling it by ordering “Action” or “Cut”) and then editing things out later. Each evening Loach would give them the script for the next day, recalls one cast member: “You’d get little notes — ‘Don’t tell Charlie or Sean about this line.’ They would have a note — ‘Don’t tell Venn.’ We never saw the whole thing and never knew where the film was going.”  Sean Glenn, who plays the supervisor in the first scene, didn’t know he would be heckled: “Ken set me up. When I went in, I expected all the guys to listen, but instead they’d been told to barrack me. I hadn’t realized at first that this was a comedy or that I was a fall guy. But Ken puts you completely at ease and makes you feel happy with him.”  Loach even included in the film a bit improvised by the cast, a routine about free sardines with orders of fish and chips.

But underneath the bantering humor and behind the stories of individual workers lurk larger issues which Loach is content to let viewers sort out for themselves. As he says, “It just grows ever more apparent that there are two classes in society, that their interests are irreconcilable, and that one survives at the expense of the other…The human cost of the experiment in free market economics that Thatcher inflicted on us… is something that never goes away. It’s always in front of your eyes and it’s always something that draws you to deal with it… The underlying observation of what people are experiencing is that things don’t have to be this way. There are better ways to live.”

A fitting postscript to the dark side of this film:  screenwriter Rob Dawber had contracted cancer through work-related exposure to asbestos and died in February  2001, living long enough, however, to see a final cut of The Navigators.

Finally, the English spoken in this film is not that of the Royal Shakespeare Company. It is midlands dialect. Don’t be impatient. You’ll probably get most of it and if you miss any dialog, just watch the performers and follow the story.

This introduction was presented by Jon Garlock at a screening of The Navigators on 10 October 2003.