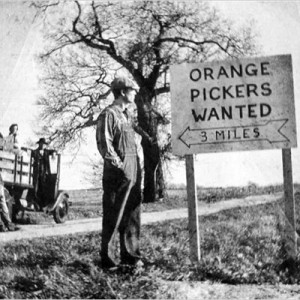 There was a feller that knew us Oakies … because early in the deal he throwed
a pack on his back and traipsed around amongst us, and lived with us, and talked
to us, and et with us, and slept with us,and he felt in his heart and knew in his
head that us Oakies was a lookin’ for a “Living with Labor.”

Born and raised in Salinas, John Steinbeck knew first-hand of the increasing industrialization of California’s agricultural production — the interdependence of large growers, banks, shippers, and utilities.  He became increasingly concerned about these “factories in the field,”  as Carey McWilliams called them, and the struggles of California’s farm  workers.

He knew of the spontaneous strikes of Mexican and Filipino pickers and packing shed workers in 1930 and the wave of strikes organized by the communist-led Cannery & Agricultural Workers Industrial Union. And he was well aware of the labor struggles and the General Strike that shut down San Francisco for two weeks in 1934.

In 1935 Steinbeck interviewed organizers of the Cannery & Agricultural Workers Industrial Union and learned in detail about the massive fruit picker strikes of 1934, which involved 50,000 workers in almost forty actions, as well as the cotton pickers’ strike that year in the San Joaquin Valley involving 18,000 workers. From these interviews he wrote, in 1935, In Dubious Battle, an important narrative treatment of one of America’s largest agricultural labor conflicts. (American cinema lost what surely would have been one of its great labor films when nothing came of Pare Lorentz’s proposal to turn this novel into a film).

Steinbeck had also followed Upton Sinclair’s bitter and unsuccessful 1934 campaign to become California’s governor.  A major plank of the muckraking novelist’s EPIC (End Poverty in California) platform proposed land colonies for the unemployed; colonies which resembled, on the one hand, the cooperative farm depicted in King Vidor’s 1934 film, Our Daily Bread and, on the other, the “Wheat Patch” government camp depicted in Grapes of Wrath.

A few such camps had actually been established by the federal government and the director of one of them, Tom Collins, introduced Steinbeck to the conditions of migrant workers when they toured California’s agricultural heartland in 1936. Steinbeck met these workers, listened to their stories and reported his impressions in a series of articles in the San Francisco News, illustrated with photographs by Dorothea Lange.

In these pieces Steinbeck described conditions experienced by migrant laborers in the fields and in their tent-camps. He observed that unlike previous groups of agricultural workers, mainly single men who followed harvest cycles on foot or by boxcar, this new wave of migrant workers flooding California from Oklahoma, Texas, Arkansas were families, travelled by car. He also noted that while the agricultural workforce had previously included large numbers of Chinese, Japanese, Filipinos, and Mexicans, the new migrant workers were of European stock and he predicted that “farm labor in California will be white labor, it will be American labor, and it will insist on a standard of living much higher than that which was accorded the foreign ‘cheap labor’.”

In September, 1936, striking lettuce workers were brutally attacked by vigilantes in Salinas. Steinbeck was outraged by what he considered incipient fascism in his hometown and his concern with migrant workers intensified. He undertook to edit Tom Collins’ voluminous camp reports and, though they were never published, these reports and letters that Collins wrote to Steinbeck provided material that helped shape The Grapes of Wrath.

In late 1937 Steinbeck began work on a novel on this subject, to be called The Oklahomans, but put off this work when a flood imperilled thousands of migrants in Visalia. In February-March 1938 Steinbeck accompanied Life Magazine photographer Horace Bristol, Tom Collins and other Farm  Security Administration staff to Visalia and spent two weeks aiding the sick and starving migrants. Moved and angered by the plight of these exploited people, Steinbeck began to compose The Grapes of Wrath in May, 1938. Working steadily toward his goal of 2,000 words a day, he completed the novel on October 26. It was published in March, 1939 and within a month Twentieth Century Fox had purchased the film rights. The film was made that summer and fall and premiered in New York in January, 1940, advertised with poster lithographs by Thomas Hart Benton.

To ensure authenticity, Twentieth Century Fox hired Tom Collins as a technical assistant and even used Horace Bristol’s photographs to help with casting. Much of the film, except for highway scenes, was shot on the studio lot. Director John Ford (who claimed never to have read the novel) and screenwriter Nunnally Johnson followed the novel fairly closely in most respects. For this, his only “social issues” film, Ford created a visual structure in which the framing of faces and figures, stark black and white tones, the use of shadows, the symbolic and metaphoric role of vehicles and roads, conveyed important aspects of the novel’s narrative.

While most of the differences between the novel and the film are minor and result from the adaptation process itself, there are two key changes that lead readers of the novel and viewers of the film to significantly different responses. First, the film reverses the novel’s sequence from Government Camp to the Hooper Ranch and instead has the Joads move from the brutality of the ranch to the serenity of the camp. Second, whereas the novel ends with the Joads stranded by flood in a railroad boxcar and Rose of Sharon, having delivered a still-born baby, suckling a starving migrant worker, the film ends with the Joads, including a still pregnant Rose of Sharon, driving off into the dawn as Ma Joad prophesies the survival of “the people.” This last scene, together with the sequence reversal, alters the Joads’ trajectory from a numbing descent toward despair and dissolution, mediated only by Rose of Sharon’s symbolic gesture, to an ascent toward hope and resolution.

Although Steinbeck had been pressed by his editors to alter the novel’s end (which, indeed was attacked by many critics) and had considered ending the book with Tom Joad’s parting speech, “Wherever they’s a fight so hungry people can eat, I’ll  be there”  —  an alternative film ending considered but rejected by Ford and Zanuck,  and while Steinbeck’s ending could not have been projected on America’s movie screens in 1940, and despite Steinbeck’s acceptance of the film’s ending, the changed ending is critical. As one commentator puts it, “The audience leaves one of the most powerful American films moved and comforted, but not, as Steinbeck must have wished, provoked.”