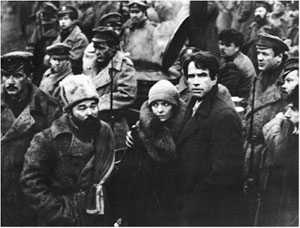 Several months after Reds was released, American Film magazine usefully published the identities of 32 ‘witnesses’ to the events depicted, whose recollections supplement and are meant to authenticate the film’s narrative. (See below. Biographic links can be found at the Wikipedia entry for Reds) . Though listed in the film’s credits, the witnesses’ names do not accompany their onscreen testimony, as they would in a documentary, leaving the viewer confused. Still, these inconclusive reminiscences, only a fraction of the interviews conducted by Beatty with John Reed’s contemporaries, hint at the film’s rich and complex context while masking the omission of Reed’s life prior to meeting Louise Bryant.

We learn almost nothing from Reds about Reed’s involvement in the great IWW-led Paterson silk workers’ strike of 1913:  his arrest during a visit to the picket line; being jailed with Carlo Tresca and others; the strike reporting which launched his career as a radical journalist;  planning and coordinating the Madison Square Garden pageant in which a thousand striking weavers and dyers reenacted their exploitation by and resistance to the mill owners; his encouragement of Robert Edmund Jones, whose design for the pageant program, the graphic of a worker rising from a factory, was subsequently adopted by the IWW for its “fan the flames of discontent” songbook.

Reds virtually ignores the pivotal event in Reed’s life — assignment as a correspondent to cover the Mexican revolution, which led him to accompany Pancho Villa for several months and enhanced his powers of observation, honed his ability to describe and interpret what he observed, and developed his sympathy with the oppressed. His accounts, published as Insurgent Mexico (1914), significantly influenced US public opinion and policy. The release in 1973, while Beatty was working on the script for Reds, of Mexican director Paul Leduc’s film, Reed, Mexico Insurgente, while perhaps explaining the omission of this episode, diminishes our understanding of Reed’s life and work.

Similarly, Reds leaves out Reed’s investigation of the Colorado Coal Wars, especially the massacre at Ludlow, when Rockefeller’s Fuel and Iron Company guards set fire to the tents of striking miners and machine-gunned their families, killing 18. Gathering accounts of the Ludlow events, Reed came to the sharpened awareness of class struggle which informed his later work, especially that on the Russian revolution.

The film also leaves us ignorant of Reed’s effort to cover the early stages of World War I, both on the Western front and, more extensively, on the Eastern front. His 1915 reportage for Metropolitan Magazine, illustrated by artist Boardman Robinson, collected in The War in Eastern Europe (1916), not only provided an account of events unfolding in the Balkans but pushed Reed to oppose America’s entry into the war.

Curiously, Warren Beatty, a notorious philanderer, omits socialite Mabel Dodge from the life of John Reed, himself no paragon of fidelity. Despite their traumatic relationship, Reed and Dodge collaborated on the Paterson Pageant, lived together in New York City and Croton, and travelled together in Europe. When Reed met Louise Bryant he was on the rebound from Mabel’s ultimate rejection.

Reds also scants Reed’s critical role as editor of The Masses, perhaps the magazine most responsible for his emergence as a public intellectual. Published by his friend and fellow socialist Max Eastman, The Masses (1911-1917) promoted radical literary and visual art as well as critical political commentary until it was suppressed — banned from the mails for opposing the draft.

Reds picks up the John Reed story in late 1915, focusing on his relationship with fellow Portlander Louise Bryant and later on her affair with Eugene O’Neill. Much of the narrative is, as they say in Hollywood, based on a true story. But all is prelude to the film’s centerpiece — Reed’s coverage of the Russian Revolution:  attending meetings, interviewing participants, making notes, collecting flyers and posters and, as had happened in Mexico, becoming increasingly less an objective journalist than an informed, critical partisan. Though Louise often accompanied Reed, she had her own press credentials and was frequently off documenting the struggle on her own, especially the role of women. Her reports, collected in Six Red Months in Russia (1918), reveal an articulate and sensitive observer whose account complements Reed’s Ten Days That Shook the World (1919).

Preparation of Reed’s account was delayed by the government’s seizure of all his notes and documents when he returned to the United States; a projected sequel, Kornilov to Brest-Litovsk, was never completed. Ten Days That Shook the World, rich in descriptive detail, quickly became the definitive account. Having read it “with the greatest interest and never slackening attention,” Lenin “unreservedly recommended…this vivid exposition of the Proletarian Revolution… to the workers of the world.”  And Trotsky, in his history of The Russian Revolution (1930), frequently cited John Reed, “observer and participant, chronicler and poet of the revolution.”

Reed’s contemporary, John Dos Passos, hailed him as “the last of the great race of war correspondents who ducked under censorship and risked their lives for a story. Jack Reed was the best American writer of his time, if anybody had wanted to know about the war they could have read about it in the articles he wrote…” (Nineteen Nineteen).

Writing about Reds in 1982, Howard Zinn noted that “sixty years after his death, millions of Americans will learn of John Reed because of a motion picture. If even a tiny fraction of these are led thereby to think about war and injustice, art and commitment, about enlarging friendship beyond national boundaries for the possibility of a better world, that is a huge accomplishment for one brief, intensely-lived life.” In honoring Reed, Zinn also honored Beatty, whose commitment, at the height of the Cold War, to making a film sympathetic to communism, grew from his social justice concerns and opposition to the Vietnam war. 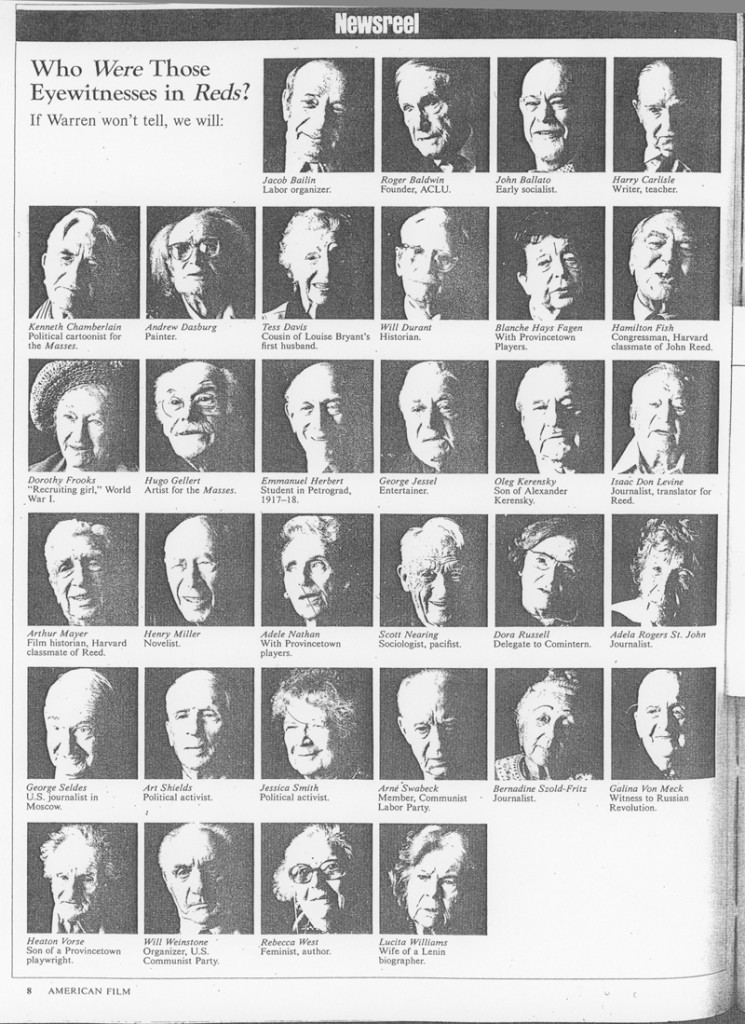