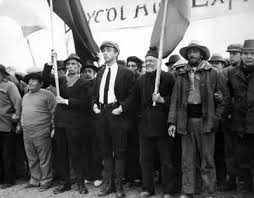 Rebellion in Patagonia is a rich, layered film that touches on a host of central themes in Argentine history and culture: imperialism, territorial conflict; the clash between the gauchesque traditions of the Argentine criollos and the ‘modernizing’ agenda of the Europeanized elites and the strained relations between immigrant and native workers. It asks questions about the nature of revolutionary ideology and practice; about contradictory impulses within the military; about the limitations — and dangers — of populist government. It is at once psychological drama, historical drama and political thriller.

Hector Olivera’s movie recounts one of the most dramatic and tragic chapters of modern Argentine history. Briefly, during the post-World War I depression of 1920, workers in the sparse provincial cities and then on the desolate and isolated sheep ranches of Patagonia began to organize themselves to resist layoffs, wage-cuts and other abuses. The workers were a mix of native Argentine criollos — offspring of the classic gauchos — and a hodgepodge of immigrants, the majority chilenos but also some Spaniards, rusos, Italians, polacos. Many of these workers, especially the European immigrants, were imbued with anarcho-syndicalist and occasionally socialist ideas.

In contrast, many of the sprawling ranches were owned by foreign, predominantly British, interests. After the owners abrogated the terms of a labor settlement that had been brokered by the national government, the workers’ desperation, anger and militancy escalated to the boiling point and in some instances took on clearly revolutionary overtones. The movie goes on to depict the brutal military repression which followed: wholesale arrests and, in all too many instances, summary executions. (It’s estimated that more than 1,500 workers lost their lives in the repression of Patagonia rebelde.)

Although the immediate and most visible villains were the military who hunted down and smashed the workers, the repression itself was sanctioned by a civilian government — and not any old oligarchic, reactionary Latin American government. A few years earlier, in 1916, Argentina had held its first democratic election ever which compelled the traditional land-owning oligarchy to turn the reigns of government over to Hipólito Yrigoyen, Argentina’s first great populist leader and self-proclaimed champion of the common man. Although the middle-classes were his main constituency, Yrigoyen extended his hand to Argentine workers, offering them a deal he hoped they couldn’t or at least wouldn’t refuse: ‘Renounce your radical ideologies and embrace a pure nationalist, bread-and-butter Argentine unionism and, in return, I’ll call off the police, pass protective legislation, put limits on the power of capital. In short, you workers will find a welcome place at the Argentine table.’

Large numbers of Argentine workers, including many immigrants, accepted the deal and embraced Yrigoyen’s benevolent and paternalistic policies. Many workers abandoned their anarchist and socialist compañeros to join apolitical unions loosely linked to Yrigoyen’s populist party, the Radical Civic Union. And many Argentine nationalist intellectuals and even some military officers applauded his populist agenda and the State’s rapprochement with the working class.

In January of 1919, however — a year and a half before the events depicted in the film — the climate of relative social peace that had been ushered in by Yrigoyen’s election was abruptly shattered. Faced with post-war economic dislocation and inspired by the recent triumphant Russian revolution, many Argentine workers rekindled the flames of revolutionary ideology and labor militancy. For their part, Argentina’s propertied and middle classes were gripped by fear, seeing behind every incident of labor unrest a bolshevist conspiracy or harbinger of revolutionary upheaval. Faced with a metal workers strike in Buenos Aires, the oligarchs and their middle class allies unleashed bloody and indiscriminate vigilante repression upon the city’s workers. If Yrigoyen and the State would not perform their prescribed duties, then the gente decente — the decent people  — would.

For a full tragic week, gangs of upper-class youths stormed through Buenos Aires working-class districts under the banners of the Liga Patriótica Argentina  — as shown in the film. Armed and led by “off duty” policemen, these rightist gangs unleashed an orgy of lethal terrorism. Hundreds of workers lost their lives. And Don Hipólito Yrigoyen, friend of the common man? Although horrified by the bloody spectacle, the populist president read the political winds: the oligarchy and many of his own middle class constituents demanded an unequivocal retreat from “workerism” and a return to the tried and true methods of breaking labor’s militancy. Yrigoyen retreated into the corridors of the Executive mansion as the blood-letting ran its course in the streets of the “Paris of South America.” And two years later, Yrigoyen would bow, reluctantly, to pressures from both domestic and foreign capitalists and send in the troops to pacify Patagonia. In the film you see no more than the emissaries of capital entering the doors of the presidential office.

For Argentine workers, Yrigoyen’s populism ended in a great betrayal. The semana tragica (the tragic week of 1919) and the Patagonia massacres of 1921 became the graphic symbols of that betrayal. Yet during his first three years in office, Yrigoyen had planted a seed: strong nationalist and populist longings continued to animate segments of the Argentine working class. They awaited another Yrigoyen, but one with more backbone and a greater commitment to the working class.

And, some twenty years later, along came Juan Domingo Perón. It is significant that Patagonia Rebelde was made precisely at the moment when Perón, the self-proclaimed populist guardian of Argentina’s workers, returned to power after an eighteen-year exile. Hector Olivera, one of his country’s best known commercial film directors, could not have made — certainly could not have released — this film before Perón’s return to Argentina in June of 1973. The fragile, conflictive and ultimately short-lived re-democratization of Argentina in the early 70s, after two decades of military rule, afforded a coveted window of opportunity for Argentina’s politically engaged filmmakers.

Olivera’s message in the film was clear in its references to both Yrigoyen’s populism and his betrayal of the working class. Labor’s embrace of Perón — the latter-day champion of Argentina’s common man  — was fraught with contradictions and dangers at least as profound as those bound up with Perón’s predecessor, Yrigoyen. Unfortunately, Olivera’s dire warning proved all too true. The film’s release preceded Perón’s death by four days and was a great box office hit but was not well received by the right-wing Peronists and the military. Olivera was obliged, after a few months, to withdraw it from public circulation. And with the military coup of 1976, the dirty war against Argentine progressives, militants and radicals — a war that had been unleashed by the right wing Peronists even before the coup — escalated into a sustained bloody massacre without precedent in Argentina’s often sad and bloody history. Indeed, the Patagonia of 1921 would seem like child’s play by comparison.