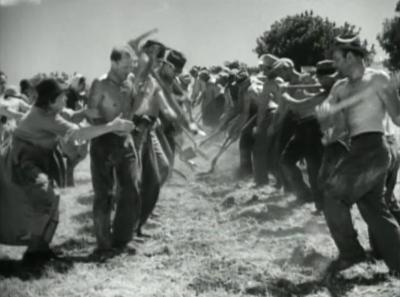 In 1932 King Vidor decided to make a film “inspired by the headlines of today.”  Many of those headlines described plant closings (idling 40% of industrial capacity and throwing  millions of men and women out of work); farm foreclosures  (ejecting millions of farm families from the land and reducing agricultural production); militant strikes involving increasing numbers of California agricultural workers; the veterans’ Bonus Army in Washington D.C. (camped near the Capitol and dispersed by  Douglas MacArthur’s troops);  FDR’s first campaign and election.

Vidor’s film would deal with the problem of unemployment and the solution promised by a growing back-to-the-land movement. By March 1933, not long after Roosevelt’s inauguration, Vidor had drafted a script. He took it to MGM’s Irving Thalberg, who liked it but declined to produce the film. Other studios also turned him down. Eventually Charlie Chaplin, to whom he showed the script, persuaded United Artists to promise to release the film, though they would not produce it. This release, along with his home, served Vidor as collateral for the $125,000 loan which enabled him to make Our Daily Bread.

The film, begun in 1933, presents a simple Depression-era fable. John and Mary (protagonists of Vidor’s 1928 film, The Crowd) are hard up in the city: John is out of work, they can’t pay the rent, they owe the grocer. Perhaps an uncle can help: “I don’t want any favors,” says John: “All I want is a chance to work.”  The uncle owns an abandoned farm in “Arcadia” which he will let them work. Since John and Mary know nothing about farming they invite a passing Swedish farmer to join them. Noting that “if one man can do as much as he has in one day, why wouldn’t ten men do ten times as much,” John hits on the idea of  “a sort of cooperative community” that might include a carpenter, plumber, stonemason, mechanic, etc. And pretty soon just such a community develops as more passersby stop and stay to work. Their willingness to work is as important as their skills: when John asks one man “What can you do?” he replies “What’s to be done?”

The cooperative flourishes. Members share their goods in common. They exchange work: the carpenter frames the mason’s shack while the mason builds the carpenter’s foundation; the shoe maker repairs the violinist’s shoe while his son receives a violin lesson.  Goods are exchanged in a swap shop where members list “I Got” and “I Want.”

Fiscal calamity is averted when one of the community, an escaped convict, turns himself in so his comrades can collect the reward — enough to see them through to the harvest. (This poignant idea was proposed by Charlie Chaplin). Later, a vision of this self-sacrificing man prevents John from abandoning the community when drought threatens to destroy their crop. John leads the men in a heroic struggle to dig a two mile ditch that will carry water to the parched fields. This episode, a striking piece of cinematography filmed, as Vidor recalled, as if he were  “a choreographer… plotting out the movements of a ballet,” was shot over ten days on an abandoned golf course using unemployed workers as extras.

Our Daily Bread was completed in the spring of 1934 but did not reach the screen until the fall: it premiered in New York in October, 1934 and was not shown anywhere in California until late January, 1935. Why did United Artists shelve this film for six months and further delay its California release? Because muck-raking novelist Upton Sinclair was running for Governor in California on a platform to End Poverty in California — EPIC — a major plank of which was “to return the unemployed to the land.” Hollywood feared that Our Daily Bread would promote Sinclair’s candidacy!

Sinclair had run for office many times as a Socialist, never receiving over 60,000 votes. However, in September, 1933 he registered as a Democrat and launched his campaign with the publication of I, Governor of California and How I Ended Poverty, a tract which detailed a program of production for use rather than for profit — a plan that included land colonies, state-run factories, increased taxation of the rich, alternative currency, etc.

Over 800 EPIC offices sprang up throughout California and Sinclair campaigned energetically,  all the while churning out pamphlets refining the EPIC program. Meanwhile, the Depression deepened; California’s agricultural workers struck dozens of times in 1933-34 and a waterfront labor dispute led to a general strike in San Francisco in July, 1934. One month later Sinclair won the primary in a 450,000 vote landslide and formally became the Democratic Party’s  gubernatorial candidate.

Louis B. Mayer, President of MGM and chairman of  California’s  Republican State Committee, rushed home from a European vacation to deal with the crisis. The  movie industry was quickly mobilized against Sinclair. Studio employees  were assessed one day’s pay, amassing half a million dollars to fund a smear campaign of disinformation and dirty tricks. These included the production of fake newsreels in which a supposed “Inquiring Reporter” interviewed Californians about the election. One of these newsreels, described in the New York Times, showed “a shaggy man with bristling Russian whiskers and a menacing look in his eye. ‘For whom are you voting?’ asks the interviewer. ‘Vy, I am  foting for Seenclair.’ ‘Why are you voting for Mr. Sinclair?” ‘Vell, his system worked vell in Russia, vy can’t it work here?’”

Alarmed by Sinclair’s suggestion that California rent idle studios to unemployed actors so they could make their own pictures, film companies even threatened to move their entire industry to Florida if Sinclair won.

Sinclair didn’t win the election, though his 879,000 votes represented 44% of the turn out. He immediately published an expose of the Republican campaign, I, Candidate for Governor: How I Got Licked.  And a theatre manager who had been prevented from endorsing Our Daily Bread  prior to the election, paid Sinclair $1,500 to introduce each showing during the first week when the film finally opened in California.

Though ads in Hearst’s reactionary Examiner billed Our Daily Bread as “Dangerous, desperate, derelicts, charged with human dynamite,” the film was well received by both critics and public. FDR liked it and Variety noted that the film’s message coincided with the views of many including FDR and Upton Sinclair. The New York Times selected it as one of the ten best films of 1934. It won a League of Nations award “for its contribution to humanity” and, though  the soviets considered  Our Daily Bread to be capitalist propaganda, they gave it second prize at their 1935 International Exposition of Film.

This introduction was presented on 16 November 2001.