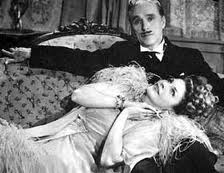 I have admired Monsieur Verdoux since I first saw the film in the 1960s during one of its brief revivals. But I had not considered including Chaplin’s portrayal of a serial bigamist and lady killer in the labor film series. It’s a brilliant choice, however, because Monsieur Verdoux is all about the business and the work of a Blue Beard. “It was no life of ease,” Verdoux reflects. “I worked very hard for what I got.”

Henri Landru, the real person on whose life Verdoux’s character is based, was a very hard-working man indeed. Between 1914 and 1919 Landru ensnared at least ten women, acquired their assets, then murdered and disposed of them. But this second-hand furniture dealer courted nearly 300 women, using so many aliases that he needed a ledger to keep track not only of all the women but the identity he used with each of them.

Tried in 1922 and guillotined the following year, Landru fascinated many, including Orson Wells who, in 1941, asked Chaplin to write a script for a dramatized documentary on the murderer. Chaplin declined, seeing in Landru’s story a “comedy of murders” which became Monsieur Verdoux. Completed in 1947, the film chronicles the frenetic life of a man  “occupied in liquidating members of the opposite sex, as a strictly business enterprise,” to support his home and family.

“He must have a way with women,” a victim’s sister remarks. “I wish I knew his technique,” a nephew replies.  We get to see Verdoux’s technique soon after we meet him in his garden, clipping roses as smoke rises from an oven in which Thelma Varnay is being incinerated. A real estate agent arrives to show Marie Grosnay the house, which Varnay/Verdoux has already put on the market. Discovering that Marie is a widow with no family, Verdoux immediately makes love to her, proffering his roses (“I want them appreciated”) and flattering her: “your eyes, deep pools of desire;… your ripeness, your luxuriousness, your everything.”

Later, he contrives an encounter outside her Paris apartment, introducing himself, however, by the wrong alias. He arranges for flowers to be delivered to her twice a week, with cards imploring “Please, please.”  Verdoux resigns himself to this business expense, sighing “These things must be done.”  When he receives an encouraging note from her there is an extraordinary scene in which we watch him profess passionate love to her over the florist’s telephone, while the florist’s face registers every emotion we imagine Marie to be feeling. Invited to Marie’s apartment, Verdoux wastes no time pressing his suit. Ringing bells signal his success.

But courtship is only one part of his business: another is tricking women out of their money. He returns to Lydia Floray from bridge-building in Indochina (“Didn’t you get my letters? I wrote practically every day”), having only moments to persuade her to withdraw her savings before the bank closes. He returns to Annabella Bonnair, played by Martha Raye, as a captain whose ship is in drydock; he would give up the sea, he tells her, if only she would let him manage her business affairs.

Still another bluebeard job skill is murder. Verdoux does away with Lydia in a matter of minutes, off-camera, but his efforts to liquidate Annabella take considerable time and comic energy.  Her “luck,” as she obliviously comments, saves her from one slapstick attempted murder after another. A true craftsman, Verdoux also works hard at improving his technique, experimenting with a poison that kills without a trace.

When he is not courting or killing women Verdoux is busy on the phone with his broker, arranging to invest his ill-gotten gains;  shuttling by train between women; or visiting his invalid wife, Mona, and their son Peter. “After the murder of a victim,” Chaplin noted in his autobiography, “[Verdoux] goes home as would a bourgeois husband after a hard day’s work.”

It is for Mona and Peter that Verdoux labors. Before the stock market collapse he had worked as a bank cashier. “Poor old Verdoux got a raw deal,” remarks a colleague. “He was with us over thirty years and was one of the first to go.” Forced to go into business for himself because “it’s hard for a man my age to find a job,”  he has plied his new trade for three years, during which twelve women in several cities have gone missing. It is steady work and Verdoux hopes to retire in two years. “I have a job,” he tells Mona, “and can always get another.”

His efforts to safeguard his family dashed by financial panic, Verdoux is arrested and tried. His appearance in court provides Verdoux a platform from which to denounce the hypocrisy of a society which is “shocked by the nature of my crime… You wallow in murder … you legalize it … you celebrate and parade it! Killing is the enterprise by which your system prospers.”  “As a mass killer,” Verdoux says, “I’m an amateur. … One murder makes a villain…millions a hero. Numbers sanctify.”

A film containing, as Chaplin admitted, “diabolic humor, bitter satire and social criticism,” Monsieur Verdoux  met with hostility both during production and after its release.. The Breen Office was not only concerned with the issue of bigamy but wanted to censor some of the dialogue in the original script, especially that equating murder with the social system. After the film opened, the American Legion organized a boycott and theaters around the country soon withdrew it from their screens.

At a press conference in  New York, reporters had few questions about the film but interrogated Chaplin on his politics: Why had he not become an American citizen? Was he a communist? In response James Agee, who would praise Monsieur Verdoux  as “one of the best movies ever made,”  asked Chaplin how it felt “to be an artist who has enriched the world with so much happiness and understanding of the little people, and to be derided and held up to hate and scorn by the so-called representatives of the American press?” Already summoned by the House Committee on Un-American Activities, (“Is Charles Chaplin your real name?”), Chaplin would complete Limelight in 1952, before going into exile in Europe.

But Chaplin believed that Monsieur Verdoux  had moral value. “Von Clausewitz said that war is the logical extension of diplomacy; M. Verdoux feels that murder is the logical extension of business…. He is frustrated, bitter, and at the end, pessimistic. But he is never morbid; and the picture is by no means morbid in treatment… Under the proper circumstances, murder can be comic.”  How true.  Consider the huge popularity of Arsenic and Old Lace, the1944 comedy in which Cary Grant’s loony spinster aunts murder 13 elderly gentlemen and have their delusional brother bury the corpses in the basement. The difference between this madcap farce and Chaplin’s comedy of murders is, of course, the intent of one merely to entertain while the other strives to make us reflect.

This introduction was presented on 26 September 2008.