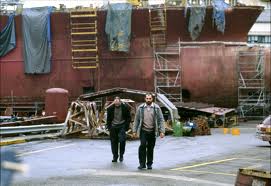 The film that we are going to see tonight it is not based on one true story but on thousands of true stories. Los Lunes al Sol (Mondays in the Sun) by Spanish director Fernando León de Aranoa tells us of the lives of mostly middle-aged men that lost their jobs when the shipyard, the primary source of employment in their city, closed its doors in 1984. 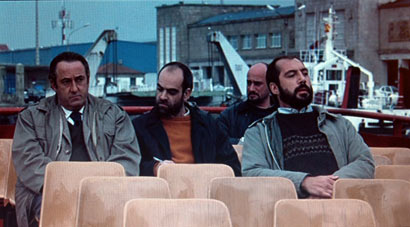 The film begins with documentary news footage: the images are real, graphic documents  taken when confrontations between police and workers broke out as a reaction to the closing down by the owners of the Aurora Shipyards, leaving more than 200 workers without jobs.

Although the film never mentions the name of the city, we know that it is in Galicia, in northwest Spain, where the ship-building industry underwent rapid expansion during the 1960s. The film’s protagonists are people who had migrated from Spain’s interior rural areas to the coast during the Franco dictatorship’s so-called “Industrialization period.”

Two years after the shipyard’s closing, only one of the group has managed to “save” himself by investing his severance compensation in a small business, a neighbourhood bar.  There, after hours, every night the group of unemployed compañeros gathers.  Between drink after drink — most of them “on the house” — they talk or silently reflect on their sorrows, frustrations and fate. These are not the marginalized wretched poor of the Third World: they are highly skilled craftsmen who have seen their jobs evaporate, sacrificed on the altar of reconversión industrial — industrial restructuring.  Thus their  Mondays (as well as any other days of the work week) are just a  string of endless Sundays. They have been forced back into the insecurities  — and frequently the behaviors — of a second adolescence .

But not all is sadness and pathos. There is also room for humor, which keeps the spark of optimism alive. Conversation, friendship and routine are the last refuge for these battered men who struggle not to lose hope or their desire to laugh as they grasp for a future on any Monday morning in the sun.

The film sets  up a situation that’s very familiar to me. In the decade of the late seventies, after Franco died and a democratic regime was instituted in Spain, the political parties which had been prohibited and persecuted came out in the open after decades of clandestine struggle.  We union militants and activists came out of the underground labor movement and started opening offices and recruiting new members. We engaged in long discussions about the nature of the new open democratic unionism as well as about what should be our immediate political, economic and social demands. We were confident that Spain’s new democracy would soon bestow better conditions of life on the Spanish working class. But this somewhat utopian  illusion  didn’t last long:  we quickly learned that constitutional democracy does not automatically mean a better economic situation for the working class. At least not in the short-term.

In the 1982 elections, the Spanish Socialist Workers Party — the PSOE —  was brought to power with great popular enthusiasm and hope. The new government soon discovered, however, that it had inherited from the dictatorship an array of neglected, protected and unproductive industries.  These industries — the private preserve of Franco’s cronies — had been  milked dry and left undercapitalised and burdened by obsolete technologies. The Socialist Party was left with the difficult and socially bitter task of transforming an inefficient  autarchic economy into a globally competitive one. This had to be done, whatever the cost, if Spain was to join the European Common Market, predecessor of today’s European Union. (By the way, this would not be the last time that the Spanish people would call upon the Socialist Party to clean up the mess created by Spain’s autocratic right wing, as the recent elections reveal.)

The social costs of so-called modernization and economic rationalization were devastating.  Unemployment climbed to 21% of the active population as inefficient industries were closed down. The unions lost their innocence and militancy in the process. We found ourselves, in partnership with the Socialist-led government, fashioning a social safety net.  Among other measures, we negotiated unemployment or job-severance compensation and economic aid for laid-off workers to start-up small businesses in the service sector;  relocation of workers and their families from one region to another; retraining industrial workers for service sector and, later, technology jobs.  We had never dreamed at the dawn of the democracy that this would be our task: merely to soften the blows of Spain’s economic modernization. We bitterly relearned the nature of capitalism and its laws: men and women eager to work and in full possession of their skills but kept from applying them by the first law of the system, known as “the law of the market.”

Unemployment, written-off by ‘objective observers’ as unfortunate ‘collateral damage’ of the system is, in reality, a compelling daily human drama of psychological, if not always physical survival, for millions and millions of people throughout the world. This movie is the story of a few of these millions. It reminds us that the drama of the so-called “redundant unemployed” is not only about the search for work; our movie’s protagonists must confront the impact of their situation on their entire social world, from intimate family relations to impersonal government bureaucracies. The struggle to maintain self-dignity and a sense of self-worth takes many paths, some of them imbued with humor and defiance, others with resignation or surrender.  One of the group — the seemingly improbable Russian ex-astronaut immigrant (not as far-fetched as that might appear) sums this up well, as he ironically reflects that “Everything they used to tell us in the Soviet Union about communism was a lie, comrade; unfortunately everything they told us about capitalism was the pure truth!”

Finally, a few words about the director and  the film’s team. Lunes al sol is the third full-length feature film by Fernando León de Aranoa (born in Madrid, 1968). He had written screenplays for ten movies before his directorial debut in 1996 with the film Familia, a black comedy about that sanctified social institution; his celebrated 1998 film Barrio is a gritty portrayal of the lives of marginalized adolescents.   Producer, Elias Querejeta,  is widely respected for his cinema work during the industry’s difficult years under the Franco dictatorship. The principal actor, Javier Bardem — the film’s  irrepressible character Santa—is known by American movie audiences for his portrayal of Cuban poet Reinaldo Arenas in the 2001 film Before Night Falls.  For that work Bardem was nominated for an  Oscar for Best Actor. He has appeared in countless movies in Spain  and is well known for activism in the Spanish left—most recently as a frequent public critic of Spain’s military participation in the Iraq war.  Lunes al sol was selected Spain’s entry for Best Foreign Film for the 2002 Oscars; apparently the Hollywood Academy did not connect with the film’s theme and it did not make it to the finalists.

I hope you enjoy the movie.

This introduction was presented by Francisca “Paquita” Vicente at a screening of Mondays in the Sun on 13  May 2004 .