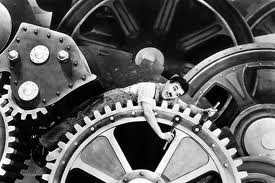 Chaplin was the only figure in Hollywood who could have successfully made a silent film almost eight years after the U.S. film industry converted to synchronized sound film making. While the talkies had become the standard of the day, Chaplin’s popular screen identity — the little tramp figure that we all know and that was known and beloved around the world — had been fully formed in the silent cinema of the teens and early twenties. The silence of the tramp was an issue that Chaplin had fretted over when producing his previous film, City Lights, in 1931. And while that film was a huge success four more years had gone by and the silent era was already being represented as ancient history.

Modern Times would be the last film, the last screen appearance of the little tramp figure. Unlike Chaplin’s previous features, Modern Times didn’t recoup its production cost in the domestic market, but depended on the tramp’s popularity abroad to realize a profit. In some important ways the tramp’s historical moment was coming to a close in the mid-1930s. Yet the tramp had always been an historical anachronism, an odd visitor from a quickly vanishing past, a person who was never really able to fit into the prevailing social order, nor able to join the forces which sought to transform that order.

From the beginning of his career at Keystone in 1914 the tramp’s Victorian, gentlemanly manners were out of place. Charmingly so in a Progressive era whose concerns with the poor almost always imagined them as lacking any culture or ingenuity whatsoever. While Chaplin’s films always dealt in some way with current social problems — prostitution, unemployment, the disparity between rich and poor, drug addiction, child labor, police corruption — Chaplin’s tramp was an outsider. From society’s point of view the tramp’s existence was entirely superfluous. He was neither indicative of current social trends nor was he a challenge to them. While his nomadic existence afforded him a critical view of modern society from the outside, it prevented him from being part of any progressive transformation of that society. Chaplin’s screen persona was neither revolutionary nor reformer.

While no self-respecting rounder, urban delinquent, roustabout, hustler or drunkard of the 1910s or 1920s would have seen Chaplin’s tramp as representing their perspectives or experiences of the world, by the mid-1930s vagrancy was becoming a way of life for tens of thousands of Americans as the Depression deepened, unemployment skyrocketed and breadlines lengthened. Some of the folks who ten years earlier had been charmed by the little tramp’s antics and moved by the pathos of his isolation were now faced with living in similar straits. If they themselves were not in such straits they probably knew folks who were. In other words, in the 1930s Chaplin’s tramp was less and less available to audiences as an object of amusement and nostalgia, as the proliferation of the jobless and homeless made such receptions more and more difficult.

In fact, in the very heart of the Depression there were those who thought that Chaplin’s tramp might be the very man of the moment and they looked at Chaplin to make a film that would be socially engaged and that would comment on the current economic crisis. In the mid-30s all art, of course, was charged with accounting for its social relevance. But Chaplin faced a problem here, as the tramp’s identity and popularity depended on his refusal to join social movements. How could the tramp be funny and take a political line at the same time?

One answer was that he couldn’t. And interestingly, in the pre-release publicity Chaplin and United Artists continually denied that Modern Times had any political relevance whatsoever or any political message. Their fear seemed to be that the film would fail to attract those who disagreed with what they would assume to be the politics of the film, or that the film would not be sought after by those who, while sympathetic with or supportive of the film’s political comments, were looking only for entertaining comedy without reminders of the seriousness of current events.

Why Chaplin’s and United Artsists’ need to deny the political aspects of the film? Part of the problem is that during this period Chaplin was being represented publicly more and more as an intellectual whose opinions about current events carried more and more weight. Before working on Modern Times he had made an extensive world tour, the second such tour of his career, and he met with statesmen such as Ramsay MacDonald and Winston Churchill; intellectuals such as George Bernard Shaw and Gandhi; the royal families of several European nations and Asian countries. Albert Einstein noted Chaplin’s eagerness and willingness to talk about such things as the need for price controls and shorter working hours, saying “You’re not a comedian, you’re an economist,”  to which Chaplin quipped that the only reason he was an economist was that so many financiers were comedians.

But even more important in forming a public expectation of Modern Times as a political commentary were reports that Boris Shumyatsky, who was then the head of the Soviet film industry, had previewed of the film when he visited Chaplin in the United States and had praised the film for its ideological acumen. Shumyatsky wrote a review of the film in Pravda before the film was released in the U.S. and the radical press in America, especially the Daily Worker, quoted extensively from this review, claiming that Modern Times supported a critique of the capitalist system from a radical perspective. Of course the mainstream press, such as the New York Times, picked up the story and Chaplin and United Artists were at pains to disassociate the film from all radical politics and from all things Soviet.

When looking at the film today it’s difficult to see how anyone would mistake it for Bolshevik propaganda. Indeed, many critics found it to be satisfactorily free of any heavy-handed politicizing or agitation. Yet the film’s first images do bear a influence of the Soviet cinema of the 1920s: the first scene opens with a montage of sheep being herded into a gate and workers leaving a factory. It’s clearly a set of images indebted to the intellectual montage of Eisenstein. One of the things we should might think about, then,  is what is the film’s debt is to a Soviet revolutionary cinema after these first shots?

This introduction was presented by Mark Lynn Anderson at a screening of Modern Times on 3 November 2000.