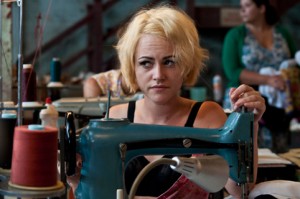 Tonight’s film is based on an actual strike that took place in 1968 when women machinists at Dagenham, Ford’s largest plant in the UK, were reclassified unskilled and their pay was reduced. They did shut down the plant; they did meet with Minister Barbara Castle, Labour’s ‘Red Queen;’  and settlement of their strike did influence passage of Britain’s Equal Pay Act of 1970.

Like Norma Rae, which came out of US textile workers’ campaign to organize J.P. Stevens, Made in Dagenham depicts a working woman’s growing class consciousness and self-confidence in the context of a struggle for workplace justice. Where Norma Rae was about the right to have a union, Dagenham is about the right to equal pay for equal work.

Because of its sympathy to unions, its portrayal of worker solidarity and its positive representation of women, Made in Dagenham, like Norma Rae before it, has been hailed as a quintessential feel good labor film.

For that very reason I must offer two notes of caution — one on pay equity and another on Dagenham itself.

Because pay equity depends on the comparability of work performed by women and men, UK employers have evaded the Pay Equity Act by segregating their workforces and resisting efforts to assess comparability. Between 1970 and 1985 more than fifteen major British disputes over equal pay were inspired by the women of Dagenham. Today, forty years after passage of the Pay Equity Act, women in the UK are paid only 79% of male rates.

Still, they fare slightly better than their American sisters, who today earn only 77.4% of what male workers earn. Just one year ago, on a straight party vote, Republicans prevented the United States Senate from voting on the Paycheck Fairness Act, which had already passed the House.  Next April 17 will be Equal Pay Day, the day symbolizing how far into 2012 American women must work to earn what men earned in 2011. And June 10, 2013 will mark fifty years since Congress passed our largely unenforced and unenforceable  Equal Pay Act.

With respect to the Dagenham Ford plant, its downsizing and repurposing almost renders moot issues of pay equity. From its peak of 50,000 workers manufacturing several lines of cars and trucks in the 1950s, employment at the plant has shrunk to 2,000 workers assembling diesel motors — albeit in a plant powered entirely by wind turbines. Whether, as the film suggests, Ford actually threatened the strikers in 1968 with moving production abroad, the company has since then done just that. By 2009, when Made in Dagenham was in production, Ford had closed many of its UK plants, locking out employees — including the Visteon workers I visited during their occupation of the Belfast factory. Please bear that in mind during the film’s credits, which include the claim that the Ford Motor Company maintained good employee relations.

Nevertheless, I urge you to sit through all the credits, which include historical footage from the actual strike as well as contemporary interview clips and photos of the strikers themselves.

This introduction was presented on 28 October 2011.