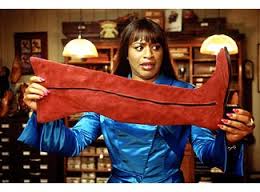 The film tells the story of a 5th generation men’s shoe-maker, Charlie Price (played by Joel Edgerton), who inherits the failing family business and struggles to rescue the factory which is at the economic  heart of the little village of Northampton, England.

“What can I do?” the overwhelmed Charlie Price asks his employee, Lauren, when he lays her off. “The men’s shoe market is gone.” “Go out and find another market,” she challenges him. The new “niche market” product turns out to be fetish footwear designed for men, inspired by Charlie’s chance encounter with Lola, a black cabaret drag queen (Chiwetel Ejiofor).

The solution to the factory’s economic woes however comes laden with its own set of complications. Re-tooling and re-inventing the tradition-bound factory is unsettling enough but  deeper struggles develop as the sometimes narrow-minded working class employees and Charlie himself respond to Lola’s high-impact presence in the factory.

The movie explores old-fashioned values: decency and unselfishness, self direction and responsibility, but it also highlights more contemporary themes of embracing diversity, tolerance, innovation and risk-taking.

The result is a charming story with an optimistic glow that is made even richer considering that it was inspired by a true story. Perhaps we are more likely to identify with “reality based” characters who must deal with dilemmas we can picture ourselves facing.

Clearly this film’s focus — a small business and its workers dealing with the economic uncertainties caused by a global marketplace, cheap foreign labor, the declining demand for skilled craftsmanship and ever looming “redundancies” (known here as layoffs) — is something American workers can relate to.

As Americans we can also identify with the characters who struggle as they deal with prejudice, change, teamwork, acceptance of others’ differences and even their own uniqueness.

The film was originally inspired by an episode of the British Broadcasting Corporation documentary series Trouble at the Top, broadcast in February,1999. It followed real life factory owner Steve Pateman who was struggling to save W.J. Brooks Ltd, his family- run Northamptonshire shoe factory, from closure decided to cater to the fetish footwear market for men.

The film character Lola is fictitious. The real Steve Pateman was prompted to try making sexy boots for male cross-dressers and drag queens by a call from the owner of an exotic clothing store looking for custom made patent leather boots in a man’s size. Taking a risk Pateman invested $20,000 in a machine that would put 4 ½ inch heels on boots and launched the “Divine” boot line.

The movie’s depiction of the  factory employee’s disgruntled response to making such a product line and their active workplace resistance mirrored reality. One salesman explained his reluctance, telling Pateman, “These people are weird. But a year later he came back to me and said he was wrong: they were lovely people, they could be trusted — and they paid.” However when it came time to model the boots for the company’s brochures and catalogues, Steve could not find a willing male model and had to do it himself.

A part-time fireman, he remains an interesting character, optimistic and pleased with his accomplishments and choices. The BBC documentary on his life, shown several times, inspired both this successful film and a hit Broadway play. Like the stories of working class culture told in films like Brassed Off, Billy Elliott, and The Full Monty,” there is something to the Kinky Boots story that touches people.