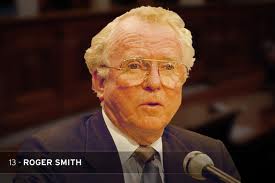 If you do know Michael Moore you know that he’s always been controversial. And the central question I want to ask in this introduction and I want to ask you as you see the film tonight is ‘Can we claim him for the labor movement or should we avoid him like the plague?’ Because he is a dangerously out of control individual. For example, if you haven’t heard, he printed up a series of checks a couple of weeks ago and wrote out hundred dollar contributions to all the presidential campaigns. The checks came from organizations called ‘Satanists for Dole,’ ‘Abortionists for Buchanan,’ ‘The Hemp Society for Clinton,’ and ‘Pedaphiles for Perot.’ All the campaigns cashed the checks with the exception of the Dole campaign, who immediately sent back the check. The other three organizations cashed the checks and the Perot campaign sent him back a letter saying he hopes that his group’s work will prosper. 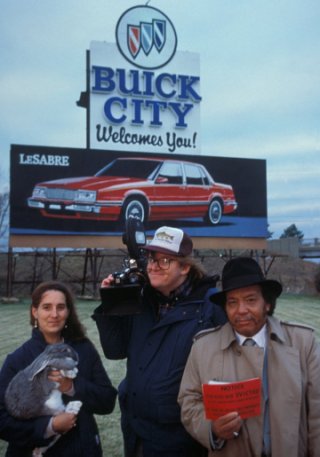 But, nonetheless, do we really want somebody on our side in the labor movement who’s going to go around writing checks like this? This is an interesting question.

As a documentary filmmaker about labor it’s safe to say there’s never been one quite like Michael Moore. He’s a cultural revolutionary with a camera, a budget, and a desire to shock us and, of course, make us giggle. I would argue that he is on our side, the side of working people and progressives everywhere, even if we sometimes have to admit that he likes to gross us out. And I mean, who on our side dares to make jokes about pedaphiles? I even have to whisper this in case somebody’s listening.

On the strength of Roger and Me he got a tv program — a tv series called ‘TV Nation,’ which didn’t last that long but while it lasted was wonderful. I guess I would have to say I don’t think there is anything like ‘TV Nation,’ either. Those of you who know it will remember some episodes fondly; those of you who don’t should borrow somebody’s video tape, if you’re lucky enough to find it.

He launched a flotilla of boats to attack Greenwich, Connecticut’s beach front which, as you might imagine, is off limits to anybody who doesn’t live in Greenwich. The flotilla of boats, called the ‘Greenwich Beach Liberation Front,’ was blocked by both the U.S. Coast Guard and the Greenwich police. And Michael Moore asked the question, ‘What if Brooklyn kept Coney Island to itself and didn’t let anyone else go to it? What if Arizona only allowed residents to go to the Grand Canyon? Why should Greenwich allow only Greenwich residents to go to the beach in Greenwich?’

Michael Moore created Crackers, the Corporate Crimefighting Chicken, six feet high, whose slogan was, ‘Don’t be a chicken. Report corporate crime.’ His first investigation was the First Boston Corporation of New York City, that got a tax break from the city if they promised not to lay off any workers: they got the tax break and, of course, within thirty days began to lay off workers.

And the women in the audience might identify with this, he began a campaign called ‘Johns for Justice,’ and he loaded porta-pots — porta-johns — on a flatbed truck and took them to various theaters where the number of spaces for women in the bathrooms were a lot fewer than men and invited the women who had to wait on line at these theaters to come out and use the johns on his flatbed truck.

He did some wonderful polls. It turned out that 60% of all Americans, if they could push a button that would make Larry King disappear, would “keep pushing and not stop.” He did another poll about Orin Hatch: 10% of all the interviewed people said they would watch Orin Hatch fight a mean dog on pay tv; 80% of the men said they would root for the dog and 100% of the women would root for the dog.

Okay, so that’s a little bit about what Michael Moore was doing after he made the film that you’re going to see tonight. And if you have made the mistake of not yet buying Working Stiffs, published by Cornell University Press — and two wonderful editors are sitting there watching you —  if you decide to buy it you’ll still have a chance after the show. If you made the mistake of not buying or not reading it, I have a chapter on Roger and Me, but I’ll tell you a little of what’s in it if you haven’t had a chance to read it.

The term “documentary” is no longer easy to use. But it’s never been easy to use. I want to mention two documentaries, neither of them particularly famous any more — one on the left and one on the right. Native Land is a famous documentary from 1940 which dramatized incidents of civil rights and labor violations that were going on in the country. It was called a documentary and yet it is virtually an entirely scripted, staged film. On the right, a film nominated for an Academy Award in 1951 as Best Documentary Feature was called I Was a Communist for the FBI. It did not win the award that year: the documentary Kon-Tiki won. But the fact of the matter was that I Was a Communist for the FBI is a fictionalized, scripted film, not a documentary at all, based on the ghost-written memoirs of a man who later said he made up the whole story anyway.

If you’ve seen other documentaries about the labor movement, about unions, you’ll understand why Michael Moore said he did not want to make another dying steel town, dying auto town documentary. He wanted to do something different. “Unfortunately,” he said, “I did not know an f-stop from a truck stop when I started to make this film.” This is an unusual film because it is so self-consciously about the filmmaker as it is about important topics for all of us — unemployment, layoffs, corporate greed, the whole mess. It’s a very biased film, I don’t think anybody would pretend otherwise. It is somewhat uncouth. It is certainly, in some places, very disturbing.

Let me read you one or two lines from the Pauline Kael review. (Pauline Kael was, at one time, I would say, the most powerful film critic in America, a critic for The New Yorker).  As a rule, I would generally like her reviews, but I was brought up very short when she wrote such a negative review about Roger and Me, which is why both UAW and GM sent it out. Pauline Kael said, “The film is shallow, a piece of demagoguery that made me feel cheap for laughing.” Notice that she was laughing, though. But she didn’t like herself for laughing. And then another quote from her review: “The picture is like the work of a slick ad exec — it does something that is humanly  very offensive. It uses its leftism as a superior attitude. Members of the audience can laugh at ordinary working people and still feel they’re taking a politically correct position.”

Well, I dare you not to laugh and I’ll leave it up to your judgment about whether this takes a “superior” attitude toward working people and where exactly we put Michael Moore on the grand scheme of humanity.

This introduction was presented on 4 October 2004.