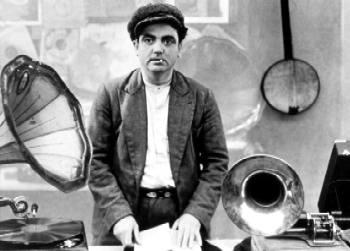 René Clair’s À Nous la liberté (known in English as Freedom for Us, though it was released in the United States in 1932 with its French title) is a musical comedy about the alienation of modern work. It’s the kind of film that might have resulted had the Marx Brothers been engaged to make Metropolis rather than Fritz Lang. René Clair shared with the Marx Brothers a mocking disregard for most forms of authority and a joyous pleasure in the subversion of all forms of social pretension and bourgeois decorum. In fact, the Marx Brothers borrowed material from tonight’s film when they made A Night at the Opera in 1935.

Even more important  was the influence of  À Nous la liberté on Chaplin’s 1936 film, Modern Times, especially on that film’s famous assembly line sequences. Modern Times copied ideas and scenes from Clair’s film so closely that Tobis, the German firm which produced À Nous through its Paris branch, sued Chaplin for breach of copyright. Clair, however, refused to participate in the suit, acknowledging that he had based much of his own work on Chaplin’s earlier screen performances; he was delighted and very flattered that Chaplin would return the compliment.  As a result of Clair’s non-participation, the suit against Chaplin was dropped.

You might recognize in À Nous la liberté, for instance, the influence of Chaplin’s The Gold Rush and The Circus, and even if you’re not familiar with those particular comedies the sentimentality of Chaplin’s tramp figure is clearly evident in one of the main characters, Émile. Émile is one of the film’s two main characters and, unlike his best friend, Louis, he is utterly out of place in the fast-paced modern world of industrial wage labor.

The premise of the film’s story is simple and is presented in the first ten minutes. We first meet Louis and Émile in prison, where they are cell mates. They plan a jailbreak but in the actual attempt at escape only Louis is able to scale the prison wall, so Émile must remain behind alone. Louis commits a small theft on his first day of freedom and begins selling gramophones on the street corner. In what amounts to only a matter of seconds of screen time we see Louis work his way up from a street corner vendor to owner and president of a huge gramophone manufacturing firm. He achieves this success by applying the techniques of production which he had learned doing table work in prison. Louis’s career is a modern success story, which Clair mockingly modeled on the life of the revered French inventor and industrialist, Charles Pathé.

The major conflict of the film begins when Émile is eventually released from prison and is forced to go to work in the factory owned by his old cellmate. So, À Nous la liberté asks  a question that most of us luckily won’t ever have to worry about facing: “What do you do when your best friend becomes your class enemy?”  By asking such an unlikely question Clair is able to pose in humorous and fanciful ways questions about how the meaningfulness of our lives has been corrupted by the ubiquity of money and the profit system.

Clair was thirty-two years old  and one of the most celebrated filmmakers in all of Europe when he made À Nous la liberté. Now overshadowed by directors such as Jean Renoir and Marcel Carné when we think about French film making in the 1930s, Clair was more widely known and critically praised at the time, especially during the first half of the decade. He had been friends with many of the artists of the Parisian avant-garde in the 1920s — people like Erik Satie and Francis Picabia — and he actively participated in both Dadaist and Surrealist movements in Paris. From his early years Clair inherited a cultural anarchism and interest in dreams and fantasy which he continued to pursue throughout his film making career.

Like many of the avant-garde of the late 1920s in Europe, Clair looked upon the development of synchronized sound film with some skepticism and much contempt. He saw the development of sound film as only further commercialization of a medium that was already becoming out of reach for most committed non-commercial artists and filmmakers. In À Nous la liberté it is possible to read Louis’s success at the manufacture of gramophones as Clair’s own wry commentary on the commodification of music and the human voice through the exploitation of recorded sound technologies. Clair had a rather quick change of heart about sound, though, in 1929, when he began to experiment with the aesthetic possibilities of sound in three films, the last of which,  À Nous, being the most adventurous of his early attempts to develop a non-realistic system of film sound.

Clair conceived  À Nous la liberté as an operetta and the musical theme which repeats itself in different ways throughout the film does more than simply amplify the plot or create an expressive atmosphere for the action. The theme song of À Nous la liberté actively comments in different ways at different moments on the story action throughout the film. Clair was interested in fighting the tendency of Hollywood films to use sound to duplicate the photographic image. He was much more interested in the possibilities of using speech, music and sound effects to open up for the audience an alternative perspective on the story. Like some of the best early sound films from Hollywood, which betray their debt to the heterogeneity of vaudeville and to variety, Clair’s films of the same period strove for a spectacular separation of stylistic elements such as sound and image, rather than a smooth integration, as in the classical Hollywood cinema.

Clair’s anti-realism and his anarchic humor have led some critics to claim that À Nous la liberté is at best ideologically confused and at worst more escapist than politically engaged. And as the 1930s wore on, the realist demand became even greater. When Clair went to Tobis, the producing firm, with his idea for the picture, they initially rejected his ideas for À Nous because they claimed that this story was communist. Once it was made, however, all of Clair’s communist friends said that it was simply anarchistic. The film ends with a spectacularly utopian vision and the question arises whether this utopia is really an escapist vision or a satirical comment on present conditions. The film’s political instability can be grasped by noting that while right wing French newspaper Action Française praised it quite highly, it was banned  as politically dangerous in the Soviet Union and in other countries such as Italy and Hungary.

One thing that many critics have agreed upon about the film is that Clair uses the prison as a metaphor for the modern industrial workplace. Today we know that the prison is not simply a metaphor but an increasingly  important component of the global economy. As more and more companies exploit the cheap labor of growing prison populations and take advantage of government subsidies for prison-based manufacturing, the humor of the comparison that the film atttempts is beginning to wear thin. Tens of thousands of workers are now employed in the U.S. in low-paying and exploitive jobs behind bars.

One final note: In most versions of the film, subtitles are few and far between. This really does not matter, since Clair uses dialogue more often as a sort of stylistic element of sound quality rather than as meaningful speech. The upshot of most dialogue in the film can be inferred from the dramatic context.

I would like, however, to provide a translation of the film’s theme song, which is heard throughout the film in different ways, again and again: characters singing it, on the gramophone, and so forth. The translation goes:

My old friend, life is beautiful,
When one knows freedom.
Let’s wait no longer, let’s go and find it.
Fresh air is good for the health.
Everyone everywhere, if one can believe the story,
Everywhere one can live and sing,
Everywhere one can love and drink.
Give us, give us our freedom.

This introduction was presented by Mark Lynn Anderson at a screening of À Nous la liberté on 5 November 1999.